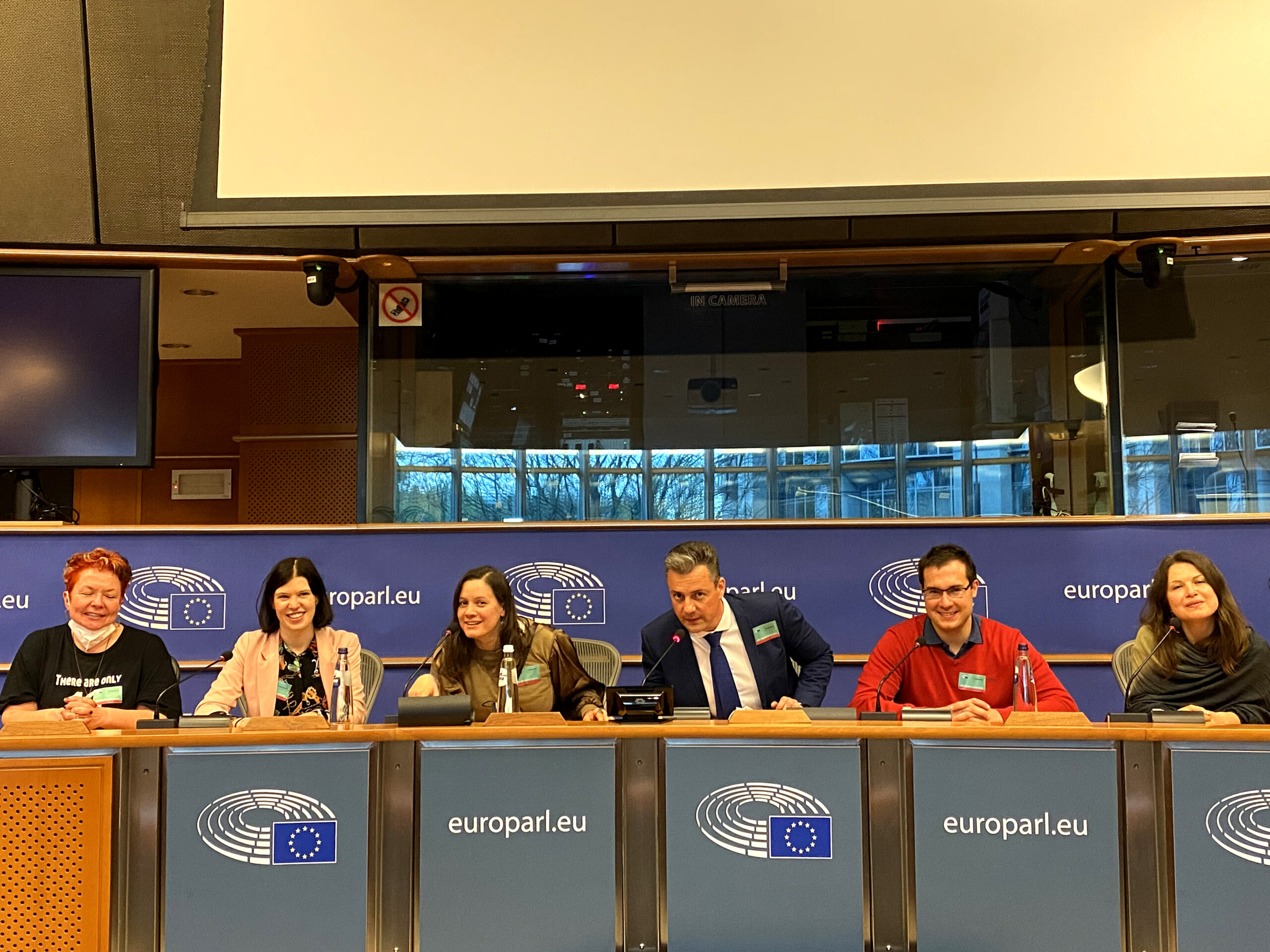 The first day participants met at 13.30 at the entrance of  European Parliament building. They had a guided tour of the Parliament and related offices. They had a chance to visit the Plenary Session room, to see the rooms where parliamentary committee meetings are held. Accomanying discussion concerned the actions taken by the European Parliament in relation to environmental policy. Then, a meeting with Ms Stella Karavazaki, Cabinet Member of EU Commissioner Virginijus Sinkevičius –  the Commissioner for Environment, was held.

Ms Stella Karavazaki is responsible for Commissioner Sinkevičus’ communication policy. We talked about the European Green Deal and how to choose the message regarding the environmental policy to the recipients. In particular, Ms Karavazaki talked about the campaign on plastics that the European Commission had been running since 2018 – mainly in Greece, Lithuania, Romania and Poland. It turned out to be important to involve NGOs and companies  (large stores)  in promoting recycling, informing about the reduction of plastic consumption in big stores.

Concerning the problems and challenges that are faced by the Commission, the most significant one is the importance to reach the target of a million Europeans with their messages. The use of social media, such as Facebook, do not reach everyone – young people do not want to read longer posts, so these message reach mostly a middle-aged audience, while older people can only be reached directly. This is the reason why non profit and large companies are considered as the best communication carriers among people who do not use social media.

For this reason, it was underlined how social campaigns and raising awareness projects, such as the ClickOnT project, play their important role in knowledge and consciousness spreading among those two groups of society. Ms Karavazaki pointed out that the Commission can take legislative actions concerning climate change, but the important thing is how the member states implement them.

We also talked about the involvement of citizens – collecting signatures for petitions to the European Commission to draw attention to specific topics related to environmental protection.

At the end, Ms Karavazaki has again underlined the importance to involve non profit and non governmental organisations in the communication process regarding environmental policy, as well as to take part in think-tanks meetings and consultations.

The day after, the participants met at 11.30 at the entrance of the European Green Party building. Mr Pito, member of the Tilt community founded by the European Greens  moderated the discussion. At first, the discussion pointed out the importance to clearly define the different target audiences in relation to different environmental topics. For instance, in was underlined that certain topics (plastics reduction) are more important for young people, while others (deforestation) for 30+.

Then, Mr Valentin Dupouey and Ms Rihanna Johnston of the Communications Unit at the European Green Party, have underlined how Tilt is a citizens’ movement demanding that the European Union works for all of us.  Tilt is working for making real change happen and it is pushing for a fairer, greener Europe.

During the discussion between all the participants of the ClickOnT project it become clear that we cannot afford to waste time, considering climate deniers in the European Parliament and big corporations with more power than any government.

At 14:00, after a lunch break, the discussion continued focusing on how the fight for a better climate and emission-free technologies requires common effort and consistent and feasible political solutions. Many encouraging steps are taken – and even more can be done. Thus, all the participants were convinced that a transition towards a Greener future is possible.

At 15:30 two additional presentations were discussed: the first one focusing on some “Advices for better climate communication” as discussed in the previous project mobility in Vilnius; the

Second one, based on a video-interview of the Professor Paolo Rognini on the University of Pisa, concerning a reflection on why certain environmental and climate change issues are not considered fundamental by the people.